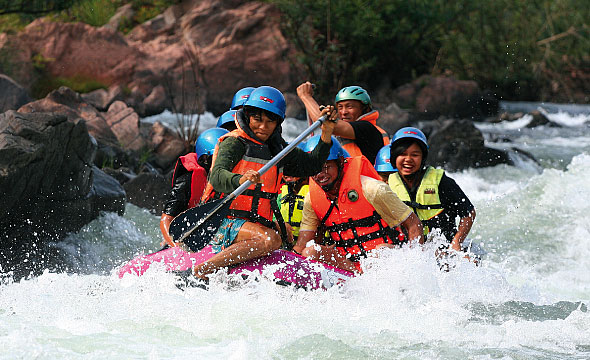 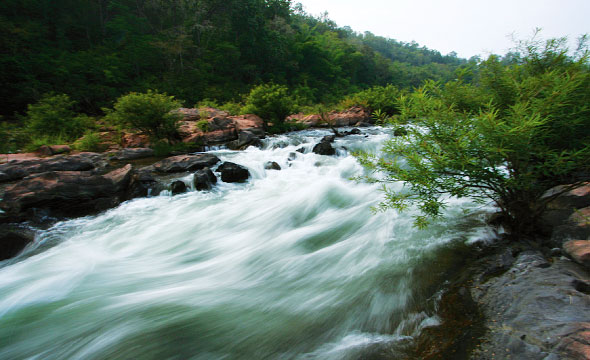 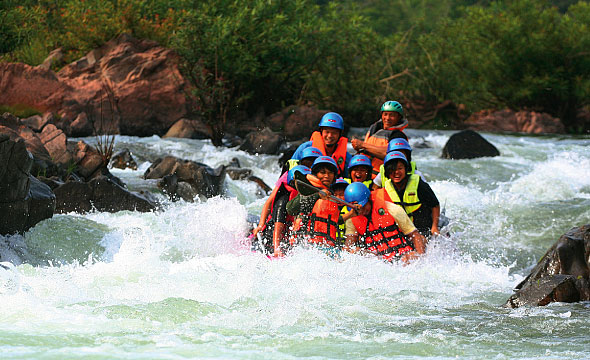 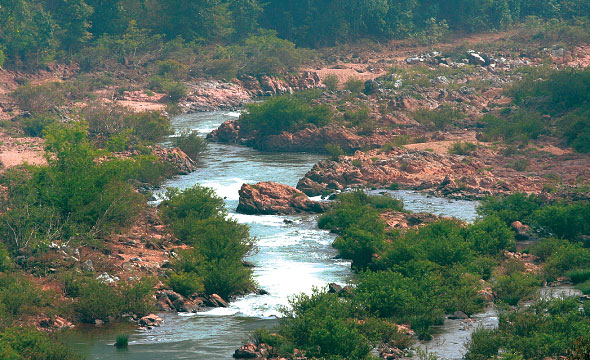 From Nan, take Highway 1168 to Mae Charim District and continue on Highway 1243 until you reach Ban Huai Sai. Then, turn left to the National Park.

Nam Wa River white-water rafting is the main adventure activity of the Mae Charim National Park and is considered one of the hardest and most enjoyable white-water areas in Thailand. The difficulty ranges from Level 1 all the way up to Level 5 depending on the season. The difficulty of rapids is at Level 3-5 during June to October, at Level 3-4 during November to February, and at Level 2-3 during March to May. The suitability of the different parts of the river is also dependent on the season as well. The upper portion of the Nam Wa River is more suitable for rafting during the cool season after which the water level drops and surfacing rocks become obstacles to the inflatable rafts. The middle part of the Nam Wa River is suitable during October to February while the lower portion of the river is suitable all year round. The Nam Wa River is about 100 km long making it impossible to journey down the entire river in one go. The rafting route is therefore split into three areas as follows:

Part One: “Upper Nam Wa River”
It begins at Sapan Village and ends at Sop Mang Village at a distance of 35 km. The early part takes you through pristine forest and jungle. On the banks, you may see rare birds, as well as animal tracks. After about 20 minutes, you will begin to come across large rocks and other obstacles; such as, whirlpools and waterfalls that come together to form the Level 3-4 white-water rapids; such as, Kaeng Suea Ten I, Kaeng Pong, Kaeng La-u, Kaeng Sop Huai Luang,
Kaeng Hia, Kaeng Kot, and Kaeng Sop Pat. Then comes the Level 5 rapids, Kaeng Tum Hok.
The highlight of the Upper Wa River is the area in which you cross in rapid succession; Kaeng Hua Meang, Kaeng Wang Ling, Kaeng Sop Huai Pa, Kaeng Wang Chang, Kaeng Suea Ten II, Kaeng Wang Put, Kaeng Wang Kaeo, Kaeng Wang Kom, Kaeng Luea Ngam, and Kaeng Sop Hua O because the distance between the various rapids is only 20–30 m. Afterwards is various smaller rapids until you reach the end at Kaeng Sop Mang.

Part Two “Middle Wa River”
This part of the Wa River starts from Sop Mang Village and ends at Wang Lun Village, which normally takes around two days to finish the 85-km route. You will have to navigate your boat through 100 large and small rapids with the difficulty level up to 5. Both sides of the waterway are green with forest vegetation. Because the river here is wide and deep, the water tends to flow very quickly and strongly. The obstacles in the area include whirlpools and large waves. Some rapids are like a small waterfall that can easily suck rafts to flip over. Traversing them requires a considerable amount of energy and skill; therefore, it is only recommended for experienced rafters.

Part Three “Lower Wa River”
With a length of about 12 km, it is the smallest and lightest of the 3 parts. With the difficulty level less than 3, it is suitable for adventurers of all ages. Starting from Kaeng Pong, you will enjoyably traverse numerous large and small rapids, including floating around and splashing about, before ending at the elephant camp. The last part of the Wa River takes approximately 3 hours.

Know Before You Go
"Call your tour operator to check the water flow suitability before travelling to Nan."

Please
"Follow the instructions of the raft guides strictly."

Recommendation
"The upper part of the Nam Wa River might be too risky for beginners during the rainy season."